skip to main | skip to sidebar

Scissors Are For Cutting Paper.


I love hearing them sing live. Impressive vocals and stage presence.
Can you imagine being that close to such attractive people?
Nauseating.
LINK Here
Posted by Jen D at 6:48 PM No comments:

Can You Spare Some Time To Listen?

Today is an exciting day for new music... Well I think it is, and maybe you will too.

Did you know that Beth Ditto front-woman of Gossip is releasing a solo EP, produced by Simian Mobile Disco? Above is a link to an interview with Beth at Triple J, an Australian Radio Station. --- Oh, the great lengths I go to to find out about my favourite music.

I love this song. This is a link to an NPR interview with Jack White, NPR: Flipside --- this is Part One to a series of weekly interviews with White. Check back next week for another interview.
I've been a casual listener of his projects and find him to be really, quite intelligent. He is a busy man with his many ongoing projects, be it, Third Man Records (his record label and store), upholstery or one of his many bands.
Photo from Third Man Records

Fences has been a current favourite of mine and this is a Shoot The Player Session Featuring Sara Quin
Fences - My Girl The Horse (Ft. Sara Quin)

Fences: My Girl The Horse (feat. Sara Quin) from shoottheplayer.com on Vimeo.

Lykke Li is someone who plays with vocals, instrumentation, sounds and rhythms. I love her quirky and sentimental songs. This is her single from her newest album "Wounded Rhymes".

Lykke Li: 'I Follow Rivers' from The Line Of Best Fit on Vimeo.

I mentioned Soko, a long while back in one of my first few posts on this blog.
She's cute, I love her accent. She's quirky and she doesn't seem to have a verbal filter.
Her songs sound like she is sing-speaking from her personal journal, usually consisting of the "fuck you for breaking up with me" variety.

Soko - It's Not Going To Work (Shoot The Player Session)

Soko: It's Not Going To Work from shoottheplayer.com on Vimeo.

The Best is Best When Things Are Best.

I've been neglecting this post about the Best Coast + Wavves + No Joy show that I attended last week. So here it is.

February 17th, 2011
Best Coast + Wavves with No Joy at the Rickshaw Theatre in Vancouver.

I usually am the type of music listener who becomes riled up and excited when I am about to attend a show. But sometimes that clincher, that spark, that excitement... never comes. In its place is the feeling of --- numbness... Maybe I was just tired. 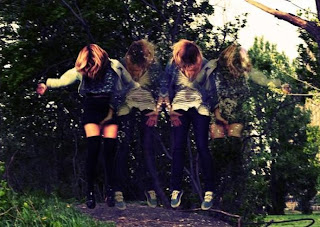 In any case, I walked into the venue during No Joy's set. I think that's how I felt walking into the theatre... No joy. Well, this is a downer isn't it? In actuality, I didn't pay much attention to the opening band. Not because I didn't enjoy their music, though admittedly experimental, it was because I was distracted. They are a collection of noises coming from two electric guitars, a bass and a drumset. I call it noise, because it filled my ears, like white noise. Fizzling in and out like it had never crossed there in the first place. I can understand the attraction of No Joy, they seem relatively absorbed in their "music expressions"... I just didn't apply myself to their music enough to really understand what I was supposed to get out of it, other than ringing ears. Nonetheless, to see a band as experimental as No Joy be able to play an hour long set is impressive... I just wished all their songs didn't melt into one another.
Music diversity, please? 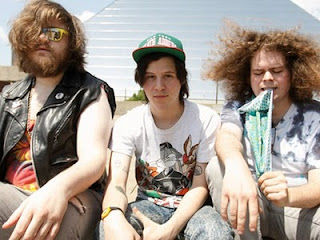 Next up, was Wavves, a trio comprising of guitar, bass and drums... and let's not forget the mishmash of muttered vocals coming from the lead... screamer? As a new listener I watched from the balcony seats separated from the teen moshers and concert goers standing skin to skin with each other down by the stage. Wavves are acclaimed to be inventive and energetic and the sort. I would see their 2010 release on multiple top 10 albums of the year. I personally, never could listen to this American noise-pop band, but that doesn't mean that I wouldn't try. They created energetic, loud and inventive--- noise. 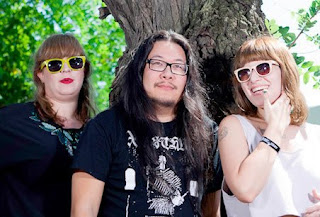 Best Coast were the band I came to see. Their pop ballads were what I really love. And maybe that says something about me, that I prefer ballads that hold some melody versus, incoherent noise. Maybe it's just my preference to want to know what the musicians are saying.
Best Coast walked on stage to an ear-splitting applause (maybe it was so, because the familiar reverb that the Rickshaw is known for left me temporarily impaired). Bethany, Bobb and Ali opened the set with their title-track "Crazy For You" finally the rhythm and melody of the song set me at ease. A highlight for me was their performance of "boyfriend" one of the catchiest songs on the record. A crowd pleaser for sure.
The night ended with me and my friend Dan checking out their merchandise, it's a habit I developed to always try and support a band I love directly. We both took home Best Coast tote bags-- which is super useful when you're a college student. My textbooks found a home inside of them.

Maybe you can judge for yourself if the music posted above is what you'll listen to in your free-time. All in all, music is experimental, it can challenge boundaries and even music can have restricting conventions. Maybe these bands are trying to break down that wall, maybe they're just trying to play the music they hear inside their heads. Maybe to some kids out there this resonates with their teen angst, and their desire to belong in a world of noise.
Posted by Jen D at 1:53 AM No comments:

Men - Who Am I To Feel So Free (Antony Hegarty Version)


It's been a while since I've felt inclined to post.
Hearing this remix makes me feel like dancing.
I've always loved Antony's voice and this is near perfect.

Oh, here is Men's video for "Who Am I To Feel So Free" sans Antonys' vocals


I giggle when I watch this. Explosive isn't it?
This is also my favourite track off of Body Talk, Mens LP.
Posted by Jen D at 5:50 PM No comments:

Labels: Antony Hegarty, Men, Who Am I To Feel So Free
Newer Posts Older Posts Home
Subscribe to: Posts (Atom)